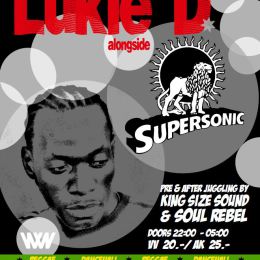 Get ready for wicked Reggae & Dancehall Nightout at the Gaskessel in Bern/Switzerland!!

The next “KINGSTON CLUB” edition takes places on Friday, 27th February 2015. This time we invite you to discover LUKIE D from Jamaica and SUPERSONIC SOUND from Berlin/Germany – the local support will be done by SOUL REBEL SOUND & KING SIZE SOUND.

LUKIE D is not an unknown Jamaican Dancehall Artists – he is established since his breaktrough in 1993 and can go sing anywhere in Jamaica and creating a havoc amongst the attending people. More over he is part of the famous singers group “L.U.S.T” (together with Thrilla U, Singing Melody & Tony Curtis) with which he is still performing in Yard and abroad. Lukie D’s voice is one of dancehall most remarkable one’s – his high-note singing voice is perfect for the lover’s genre and this is where he made himself a house hold name, as beeing one of Jamaica’s top Loversrock singers. We eagerly await Lukie D’s performance in Bern, knowing that he will bring a unique touch and huge catalog of tunes that he will be performing – await a smooth and soulful soundsystem-show in the original jamaican way! 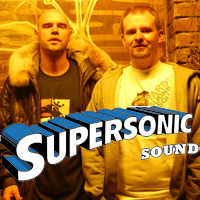 SUPERSONIC SOUND has been started by DJ Panza, who somewhat founded the worldwide known sound around 1998. Soon after he got joined by the MC Spider and since then the two are rocking trough the global dancehalls presenting reggae & dancehall music. Supersonic also took it’s chances to participate in Soundclashes against the scene’s greatest and also won one or the other trophy – one of the huge wins was against Mighty Crown, the leading japanese Reggae & Dancehall Soundsystem. The clashing and partying brought Supersonic to most places on earth where Reggae & Dancehall is played – Europe, Japan, USA, Jamaica – you name then. In the recent years Supersonic also laid their hands on producing & releasing music under their own label “Supersonic Sound”! 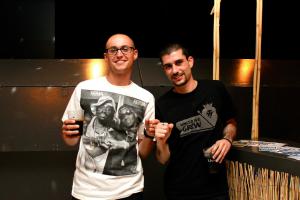 SOUL REBEL SOUND is a household name in the Reggae & Dancehall Scene in Switzerland’s capital Bern – the “Chocolate from Kingston” Events are held at the ISC, Bern and at the Selig Tanzbar in Chur. Puppah Struggler and Selector KS are not only known for a wicked party-juggling, but also for their music productions released under the label “Soul Rebel Sound” – their latest production featured reggae & dancehall artists from Europe aswell as Jamaica.