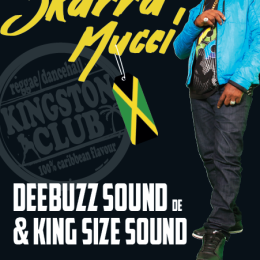 On Saturday, April 30, 2016 we are closing the #KingstonClub season with a real treat for you – let’s welcome SKARRA MUCCI & DEEBUZZ SOUND at the Gaskessel in Bern/Switzerland. Be ensured to enjoy a wicked night full of reggae & dancehall vibrations, a soundsystem performance by Skarra Mucci and top entertainment from Deebuzz & King Size Sound awaits you. Join us at the #KingstonClub! 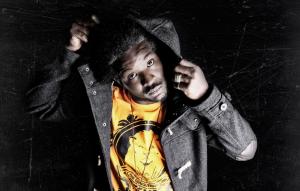 Jamaican born Skarra Mucci is well known as a versatile artist in all trades of black music, he can rap, sing soul & r’n’b tracks and crosses the bridge to reggae and dancehall with ease. Skarra Mucci is travelling the globe with his music and unique style of delivery and is always creating and releasing new tracks. In Switzerland Skarra Mucci is well known for his collaborations with some hip hop artists in the late 90’s, and of course for his massive hit „Bonx it pon me“ (produced by Ganglords) which got him heavily airplay on the Swiss radio stations.

Skarra Mucci got already five LP’s on his belt – his 2014 release „Greater than Great“ got nominated as the best dancehall album in France. Currently he is working on his 6th album called „Dancehall President“ which is going to be released on May 13, 2016. Expect to hear one or the other brandnew track at the #KingstonClub show.

Skarra Mucci’s performance will be supported by his longtime sound Deebuzz Sound from Mannheim/Germany and of course they will also play a party set right after Skarra’s show. The Deebuzz Sound is not only known for their vibefull mixes, soundclash & juggling performances and music productions – they are also running the RUDE 7 Club in Mannheim. Over the years they welcomed and played alongside the cream of the crop of the international reggae & dancehall scene – they know what it needs to get a dance going!

We are looking forward to vibefull night at the Kingston Club – make sure you are there to whitness Skarra Mucci, Deebuzz & King Size Sound live in action!

Ps.. get your ticket online on www.starticket.ch