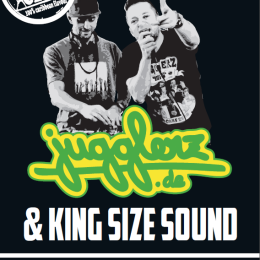 A wicked night full of reggae & dancehall is guaranteed as Jugglerz are well known for their top entertainment qualities and musical selections. Join us at the dance and party with Jugglerz & King Size Sound!

Basically a year after their last performance in Bern the Jugglerz are back at the Kingston Club @ the Gaskessel in Bern and a lot has happened in the meantime. Shortly after the dance in Bern City the Jugglerz went to Berlin to kill Black Chiney at the War Inna East Soundclash. At the Summerjam in Cologne they „jamaicafied“ hip hop artists Cro’s stage show on the main stage before tearing down the festival’s dancehalltent. In August they travelled to Jamaica for the Dreamweekend in Negril where Jugglerz went head to head with Tony Matterhorn in a musical battle that ended handcuffed. Both MC’s have been carried away to the police station because of the use of indicent language, but got released later on 🙂 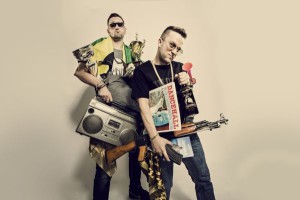 Jugglerz also continued their work as producers on the label „Jugglerz Records“ and are soon going to release the album „Jugglerz City“ – the release date will be March 18th, 2016 – you can preorder the album on iTunes & Amazon. It features tunes from artists like I-Octane, Chris Martin, Randy Valentine, Bugle, Romain Virgo, Phenomden and more!

We are looking forward to a vibeful night at the Kingston Club – make sure you are there to withness Shotta Paul & Meska aka Jugglerz and King Size Sound in action!

Ps. the presale is running on www.starticket.ch – grab yours!

PPs. add the event on your Facebook-Agenda